Getting back to normal

As the country shut down due to Covid-19, so did many laboratories. However, since many labs are in essential industries, the shutdown was not quite as severe as other industries, such as restaurants, dentists or car dealerships. In a survey we conducted, 65% of respondents said they never shut down their labs completely. 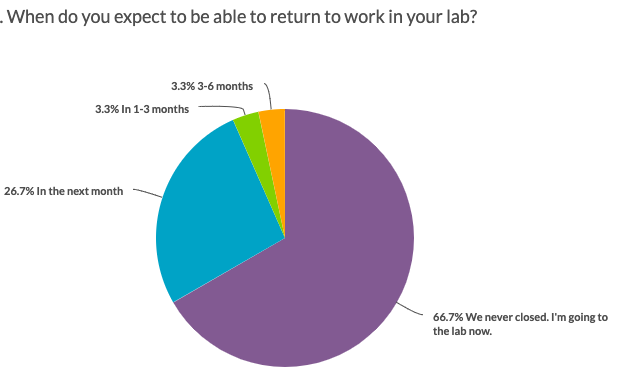 Many did run with smaller staffs or spread out the work to more shifts and to weekend shifts. In fact, more than half of respondents said their lab operations would be working at less than maximum capacity for the foreseeable future.

Using our IoT sensors to track equipment utilization in laboratories, we can see this pick up in activity over the last couple of months. The lowest activity is seen in the last week in March and the first week in April. Since that time, utilization has been slowly increasing and, in fact, has returned to normal in the southern part of the USA. Utilization in the Northeast, Midwest and West is still about 35% lower than it was before the stay at home orders, but has risen tremendously since stay at home orders have been lifted. These data correspond to activity measurements from other sources as well.

As of 2020-06-12, a snapshot of the COVID-19 utilization tracker shows that utilization is gradually increasing. 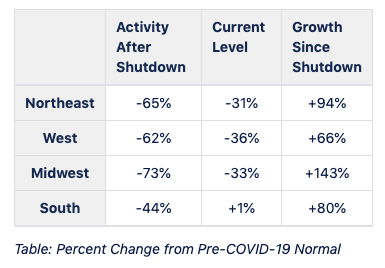 After the shutdown there was a nationwide drop in activity of ~65%.  Currently, the southern region has returned to normal levels while the rest of the country has approximately doubled activity from the lowest point. While this activity has risen tremendously it is still only about 2/3 of normal.

This agrees with other nationwide trends:

One study of mobile data shows a similar trend in gas station attendance and grocery store visits.  Nationwide drops in April of 30-60%, with the southern cities returning to normal while the rest of the country is a bit slower to resume normalcy.

The NYTimes reports that dentists are returning to work, which is a sign that people are feeling more comfortable to return to normal. Dentists are a great barometer for economists studying the Covid-19 shutdown as there aren't really any alternatives to their services and they typically don't go out of business for other reasons, like restaurants or retail stores do. Dental offices are typically pretty steady.

Just as economists can track the economy using data from various sources, lab operations managers and directors can use smart IoT devices to track the utilization of their laboratories and lab equipment. To learn more click here.